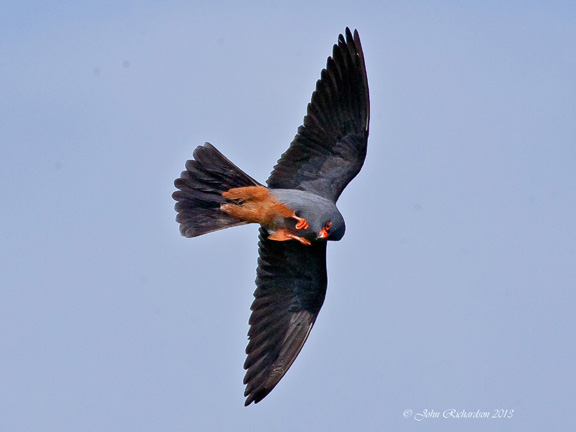 The Suffolk Little Tern Group works to protect Little Terns in Suffolk by locating, fencing and monitoring birds nesting on our beaches. The group is made up of conservation organisations (RSPB, SWT, NT, Natural England) and other Local Biodiversity Action Plan stakeholders. The group have a number of flying fences which can be deployed to protect colonies vulnerable to predation and disturbance.

Little Terns arrive on the Suffolk Coast in mid-late April. Courtship usually takes place in areas with a plentiful food supply and nesting will follow near by. The identification of these potential nesting sites early in the breeding season is vital in order to ensure that the most vulnerable colonies are protected.

We request the assistance of BINS members in locating Little Terns on the Suffolk Coast in the approaching breeding season. The more pairs of eyes the better!

Please text details of your Little Tern sightings to Robin Harvey on 07813821163. Please include clear information on location (grid reference if possible for less well known sites), the number of birds involved and behaviour (eg. courtship/food passing). Any information will be gratefully received, no matter how insignificant it may seem.

As the season progresses we hope to build up a clear picture of every potential and confirmed nesting site. There may be opportunities for BINS members to provide additional assistance with the ongoing monitoring of certain colonies.

Many thanks for your assistance. Together we can ensure that this charismatic species has a future in Suffolk and beyond.

In order to minimise the impact of disturbance on rare breeding birds, while still encouraging the proper reporting of these species, the Rare Breeding Birds Panel has compiled some guidelines on how records of these species should be handled during the breeding season. As a result Suffolk BINS will NOT be publishing any news or photos of such species at potential breeding sites in due course. Please click on the link below for more details.

Minsmere - The Great White Egret was again seen on pools behind South hide though generally elusive + 4 Spoonbill on the levels and an Osprey over.

Knoddishall - Red Kite over the village at 12:15hrs.

Felixstowe - The reeling Grasshopper Warbler remain along the tomline wall at the ferry.

Brettenham - Red Kite again seen in the village feeding on a pigeon carcass. 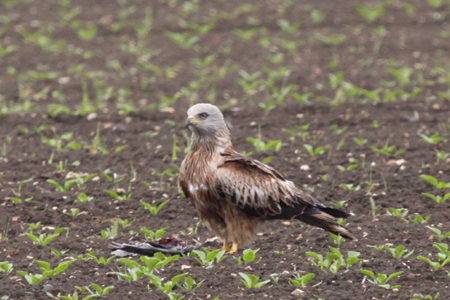 Boyton - No sign of the Wryneck at Banter's Barn in brief search early morning.

Lakenheath - SAVI'S WARBLER still singing and showing on & off near West Wood.

Boyton - A Wryneck was seen this evening by Banter's Barn at 18:00hrs and again at 19:15hrs though very elusive.

Bawdsey - A Swift sp (PACIFIC SWIFT?) complete with a white rump was seen over the lagoons at East Lane for 40 minutes from 15:33hrs before drifting off North towards Shingle Street. 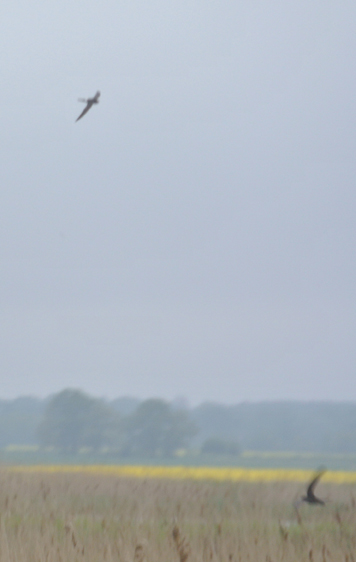 Felixstowe - The Grasshopper Warbler was again present and showing well along the tomline wall, Felixstowe Ferry by the Pottamus boat house. 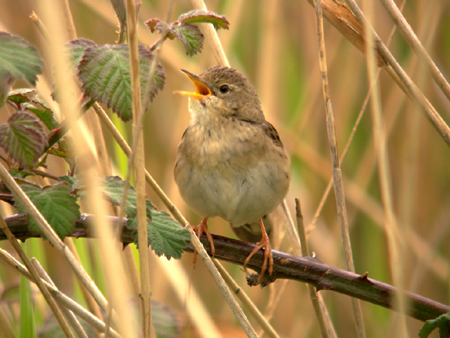 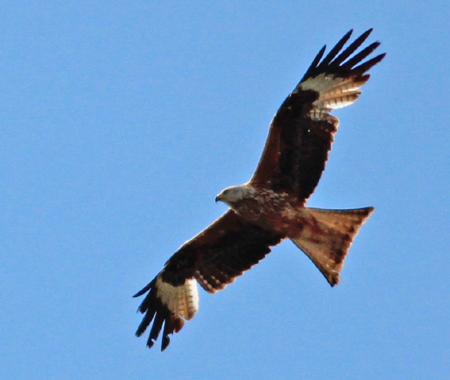 Felixstowe - A Wood Warbler was trapped and ringed in the heligoland trap this morning at Landguard. 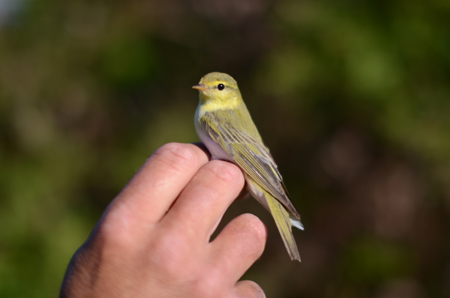 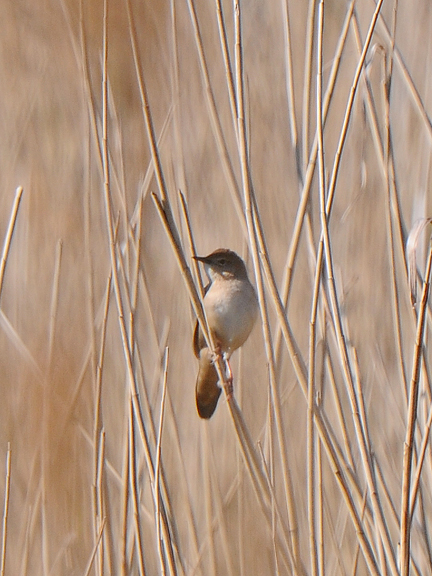 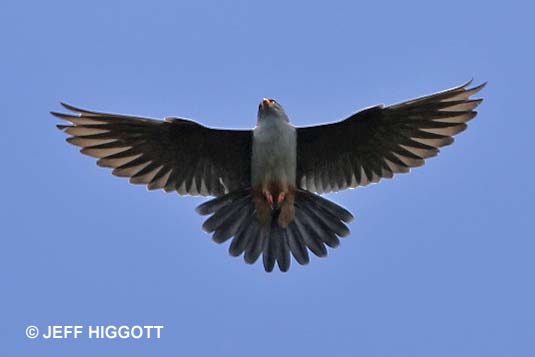 Southwold - The male Red-backed Shrike remain in sheep fields at Easton Bavents. Please keep to public rights of way and do not enter in to fields.

Walberswick - A male Red-backed Shrike was present on Westwood Marsh 1 1/2 miles West of the wind pump close to the footpath at 10:15hrs.

Boyton - A Probable adult Purple Heron was seen high South from the river wall at Boyton Dock at 05:40hrs and appeared to ditch between Boyton Hall and Hollesley.

Felixstowe - A Grasshopper Warbler was seen along the tomline wall at the ferry by Pottamus boathouse. 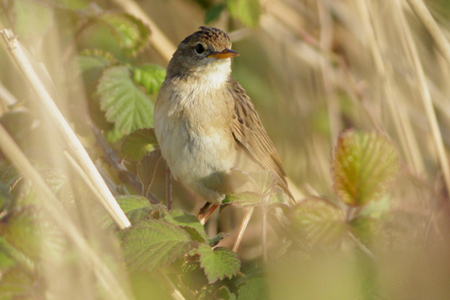 Southwold - An adult male Red-backed Shrike was found by the along the fence line on the West side of the sheep paddocks at Easton Bavents at 08:50hrs and was still present early evening at least.

Minsmere - A female Golden Oriole was reported near Canopy hide at 16:10hrs.

Lakenheath - A SAVI'S WARBLER was heard and seen opposite West Wood at 08:00hrs and then was heard intermittently up until mid morning then showing on & off again from 15:25hrs 100 yards beyond New Fen. The stunning adult male Red-footed Falcon continued to please all-comers as it showed amazingly well just East of West wood today, also Golden Oriole heard, up to 4 Common Crane seen and several Grasshopper Warblers noted. 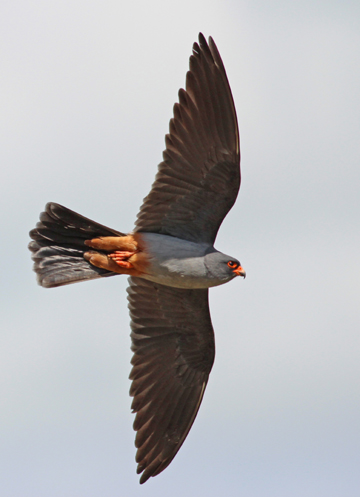 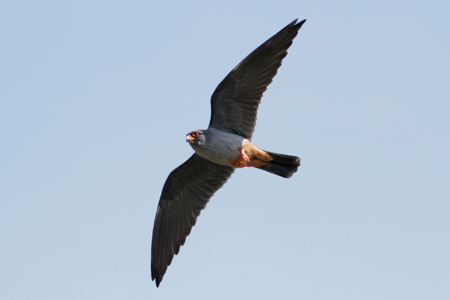 Minsmere - The SAVI'S WARBLER was again heard during the early hours from Bittern hide.

Blythburgh - An Osprey was seen West over the Blyth valley at Mells Hamlet @TM.410.769.

Minsmere - 5 Spoonbill remain on the levels.

Minsmere - 5 Spoonbill remain on the levels.

Assington - A female Red-footed Falcon was seen at 17:30hrs 5 miles SE of Sudbury + 2/3 mile E of Assington by A134 / Marshalls Green junction then flew South toward paddock.

Lowestoft Area - A Woodchat Shrike was found on the denes oval at 07:45hrs in dead bush by the East entrance and still present mid afternoon at least + the adult male Red-backed Shrike was again present. A 1st summer Montagu's Harrier was seen from the South wall at Breydon between Humberstone Farm and pumphouse + 3 Arctic Tern thru. Great Northern Diver North past Kessingland at 09:30hrs. 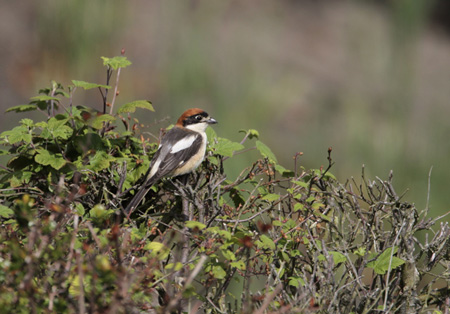 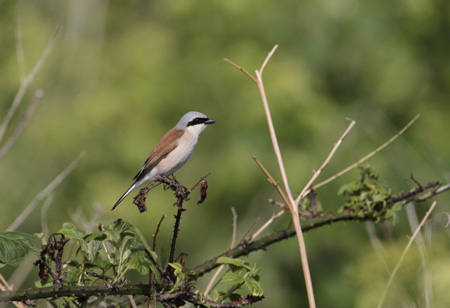 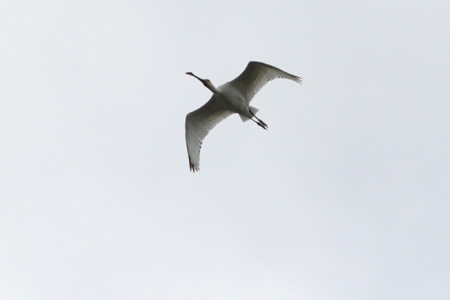 Lowestoft Area - An adult male Red-backed Shrike was found this evening in isolated bramble clump just North of the denes oval. Ringtail Montagu's Harrier was present and showing well from the South wall at Breydon Water by the pumphouse at 09:55hrs til 11:40hrs when flew North over the estuary.

Butley - A Raven was seen over Burrow Hill then flew over the river towards Gedgrave. 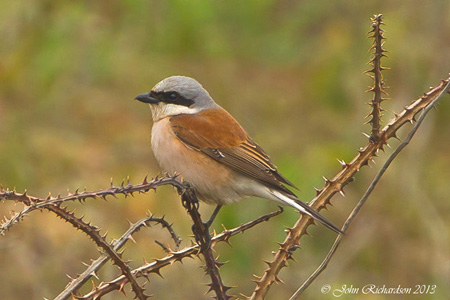 Trimley - A Temmincks Stint was noted at Trimley Marsh SWT from Cobb hide late morning and still present this evening. 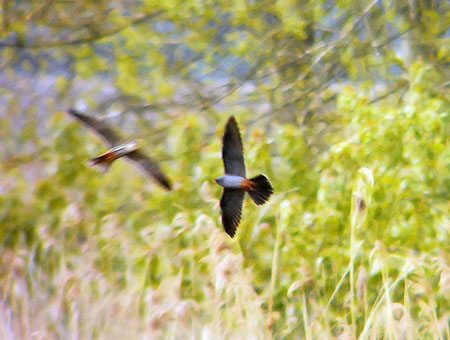 Boyton - A Temmincks Stint was seen briefly on the flash before flying off SE. 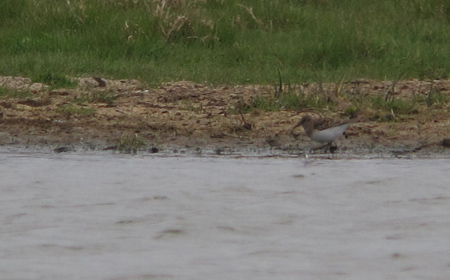 Trimley - An Arctic Tern was seen in Thorpe Bay.

Felixstowe - Both Firecrest and Tree Pipit seen within the compound at Landguard. 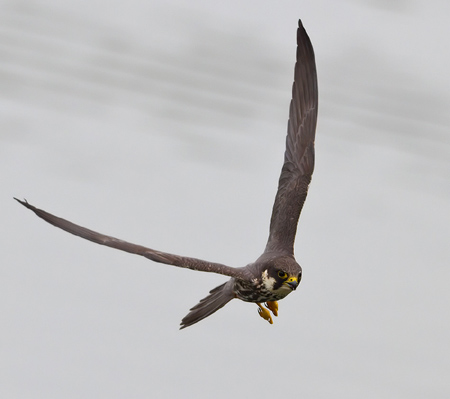 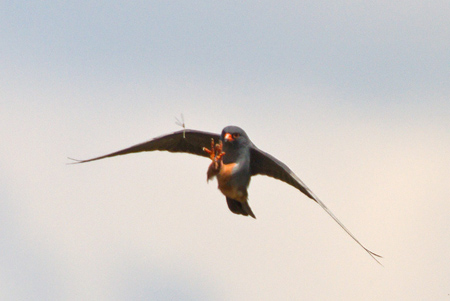 Minsmere - Spoonbill on the levels. 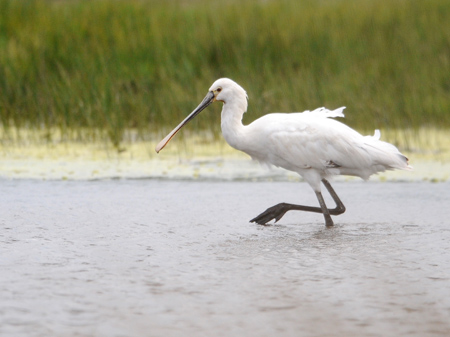 Felixstowe - A Honey Buzzard was seen to come in off at Landguard early afternoon, also offshore from Landguard were; 2 Pom Skuas, 2 Manx Shearwater & 2 Arctic Tern which were all noted North + Whinchat on the butts. An adult Pom Skua complete with spoons was noted North off Undercliffe at 14:20hrs.

Walberswick - A juvenile Glaucous Gull was rptd from Tinkers Marsh on the 2nd pool beyond the bailey bridge.

Otley - A Honey Buzzard was seen West over Otley college at 09:50hrs.

Felixstowe - Both Marsh and Wood Warbler were caught together in the same net this morning at Landguard and remained on site though generally elusive. 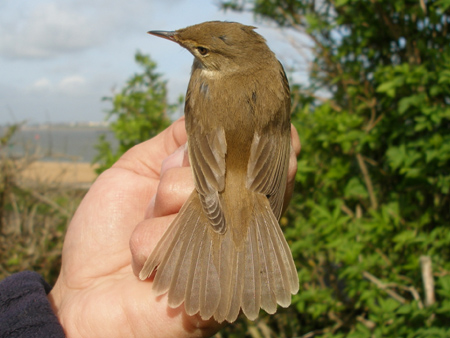 Minsmere - A male SAVI'S WARBLER was heard singing between West hide and South belt cross-roads from 07:20hrs til early evening at least + Spoonbill on the levels.

North Warren - Spoonbill on South Marsh early morning only, though no sign of the Cattle Egret.

Orford - A Pectoral Sandpiper was seen briefly on Orfordness NT before flying off South. 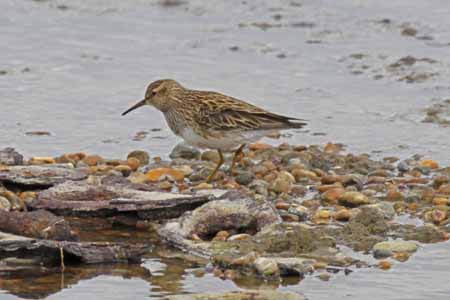 Minsmere - A Cattle Egret was discovered on South levels this morning, then flew high South at 11:45hrs + 3 Spoonbill around the reserve.

North Warren - The Cattle Egret that was seen on the levels at Minsmere (above) was seen on South Marsh at 15:15hrs. 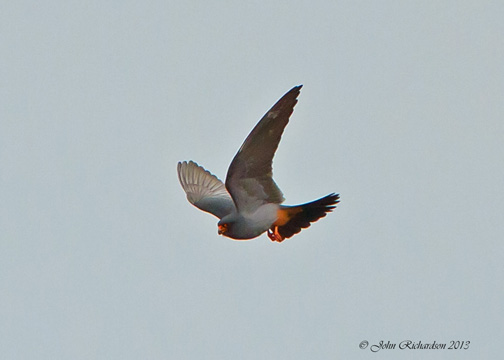 Lowestoft Area - A Honey Buzzard was seen over St.Olaves at 11:30hrs.

Minsmere - 6 Spoonbill were today seen around the reserve. 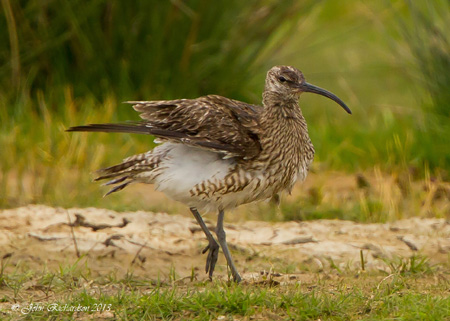 Lakenheath - A Montagu's Harrier was rptd West over Lakenheath Fen RSPB at 09:15hrs.

Minsmere - The Purple Heron was again seen today behind both West and South hides, also the long-staying female Ferruginous Duck was seen on pool behind South although elusive at times. On the levels, 1 Spoonbill remain + 3 Spotted Redshanks.

Felixstowe - A Grey Partridge was an exceptional record at Landguard.

Lakenheath - The Red-footed Falcon was again present and showing well from Joist Fen watchpoint this afternoon. 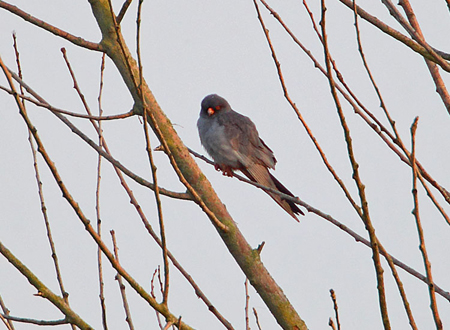 Minsmere - Fem Ferruginous Duck still on pools behind South hide + 2 Spoonbill on the levels, which were seen to fly North over Sizewell at midday. A Purple Heron was rptd on Is.mere late afternoon.

Cattawade - Wood Sand still on the roadside pool by the Brantham roundabout.

Brettenham - Red Kite seen again over the village this afternoon.

Trimley St.Mary - A Rough-legged Buzzard was rptd North over the primary school at 11:30hrs.

Livermere - 2 Black Tern on Broadwater Lake til early afternoon only. 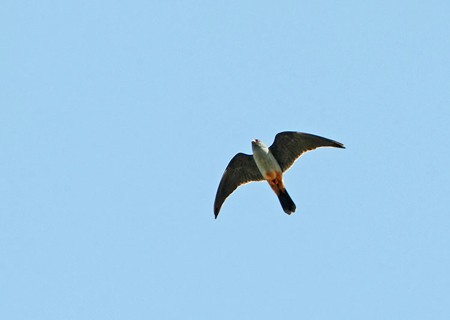 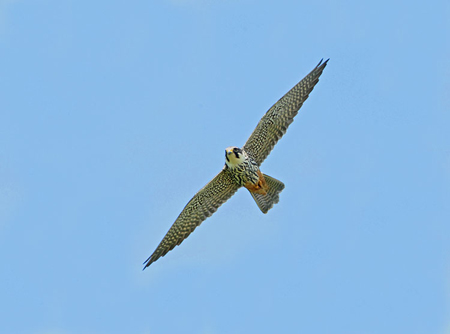 Minsmere - The female Ferruginous Duck remain on the pool behind South hide today.

Boyton - A Temmicks Stint was found on the flash at Boyton Marsh at 15.32hrs and was still present early evening at least.

Cattawade - The Wood Sandpiper remained on the roadside pool by the Brantham roundabout.

Minsmere - The female Ferruginous Duck continues to show on pool behind South hide + Garganey on the reserve.

Hollesley - A Nightjar was heard early churring on Hollesley Common.

Cattawade - The Wood Sand remain on pools by the Brantham roundabout.

Bawdsey - Hawfinch again seen in the grounds of Bawdsey Hall.

Levington - No sign today of the male Golden Oriole at Levington Lagoon.

Brettenham - 2 Red Kites seen over the village this morning.

Southwold - A Hooded Crow was seen South over Easton Bavents at 11:25hrs.

Boyton - Wood Sand seen on the flash at Boyton Marsh.

Hollesley - A Spoonbill was present on Hollesley Marsh this evening.

Felixstowe - 2 Black Redstart on the point at Landguard.

Levington - The male Golden Golden was again seen by Levington Lagoon then flew towards the sewage works at 12:40hrs. Please note; Levington Lagoon is a SWT nature reserve, therefore please keep to the footpaths at all times.

Cattawade - 2 Wood Sands on the pool by the Brantham roundabout.